In his inaugural speech 1966/67, Rector Mieczysław Klimaszewski spoke of vivid international contacts of the JU in the previous year. Among other things he said, The issue of international contacts is not an expression of snobbism, but a necessity. One cannot conduct research in isolation. The development of science and research at our University requires knowledge of the achievements of science in the world; each discipline at our University should see and define its place in national and world science in order to obtain increasingly better results and better ranking for its field and the University. Scientific contacts force us to increase the scientific level of our workers and the University itself.

In 1966 the JU hosted Director General of Bri­tish Council Sir Paul Sinker who spoke about possibilities of co-operation between these institutions.

During his two terms Rector M. Klimaszewski made many international con­tacts while visiting foreign universities. Consequently, in 1969-71 the University collaborated with 10 universities in the framework of agreements: Kiev, Jena, Bratislava, Pecs, Helsinki, Gent, Liège, Uppsala, Bordeaux and Budapest. During that period the University negotiated agreements with the universities in Vilnius, Glasgow, Padua, Cluj, Zagreb, Skopje, Prague and Alliance College in the USA. It also hosted numerous foreign delegations. It was the International Relations Office that prepared these visits and agreements, the JU visits abroad, exchange of staff and students. It should be remembered that every agreement and visit or even purchase of groceries used while receiving foreign delegations required special permissions from the Ministry of Science and Higher Education of the Polish People's Republic.

Rector M. Klimaszewski paid visits to the Universities in Glasgow, Sterling, St Andrews, York, Leeds, Oxfor­d and London, which intensified the JU bilateral exchange (in 1971/72, 600 academic staff went abroad and the JU hosted 350 scholars from 27 countries). In 1972, Rector Klimaszewski and Rector Dymitr Filipow from the Saints Cyril and Methodius in Veliko Turnovo, Bulgaria, signed an agreement of scientific collaboration, which included the creation of the course of Bulgarian at the JU and a course of Polish at the Bulgarian university.

Collaboration with international univeristies also embraces cultural exchange. For example, The Chamber Orchestra of the University of Jena performed in Kraków on11.10.1971. Within cultural collaboration the JU and the University Erlangen­-Nürnberg have organised concerts of their artistic ensembles since 1994. The JU IRO helped organising concerts of the JU Choir in Erlangen-Nürnberg, Heidelberg or Israel. 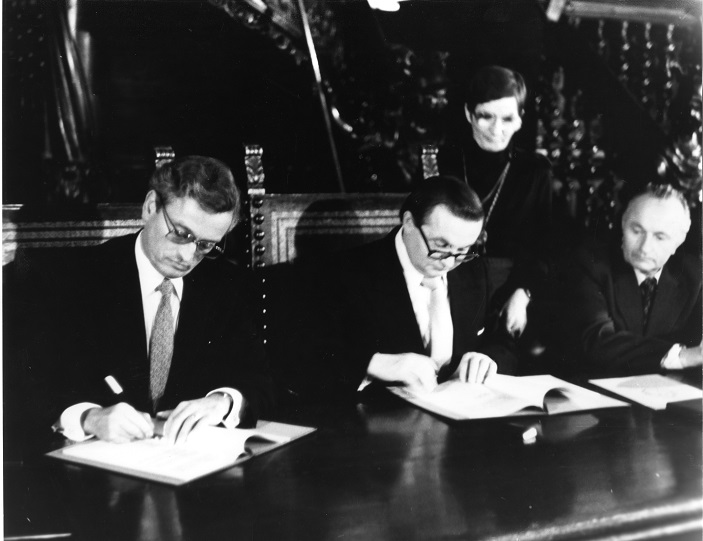 From 1972 the JU IRO took over the tasks of a travel office: booking tickets and hotels as well as all the financial assistance to JU staff and students going abroad. It also began preparing plans of visits. JU students could go for short and long-term studies to the universities in Kiev, Moscow, Vilnius, Jena, Leipzig, Bratislava, Budapest, Za­greb, Veliko Tarnovo and St Andrews.

The new JU Rector Prof. Mieczysław Hess (1977-81) visited 16 American universities and colleges in autumn 1978. The result of these visits would be seen later.

The Jagiellonian University began signing agreements on faculty and institute levels. The first of such agreements was signed between the JU Chair of History and Theory and the Chair of Musicology of the University of Bologna. 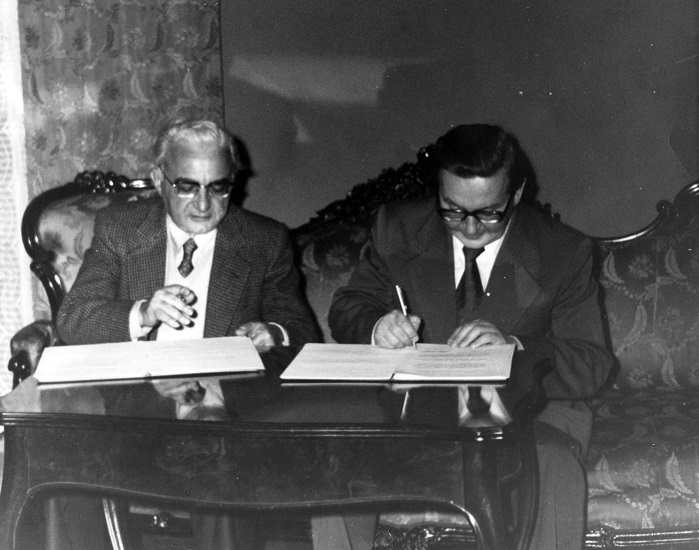 ounties. Besides, 158 JU students were on internships mainly in the Soviet Bloc countries, the only Western university was St Andrews (3 students).

The political situation in Poland in the years 1981-82 influenced the JU international relations to a considerable extent. The imposition of martial law in 1981 caused the annulment of numerous visits and almost completely stopped scientific exchange.